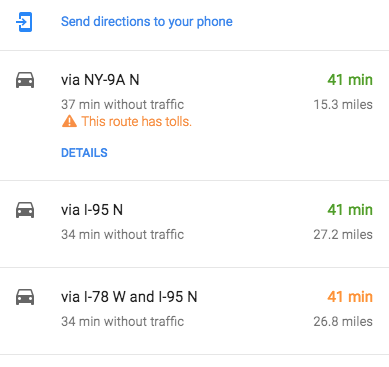 While using Google Maps to pull some directions I stumbled unto a case where every single option gave the same time estimate. I like harboring the idea enough people use Google Maps that they’re able to optimize each route to reduce the total time across the entire system. By having enough data from the tens of thousands of drivers on these roads Google can predict how busy the roads will be due to the directions they’re providing. In turn, they’re able to use this information to predict what the traffic patterns will look like on those roads in the future and use that knowledge now to change it.

I doubt it’s that sophisticated but such approaches will becoming dominant when self driving cars take over. Similar to how modern skyscraper elevators ask for your desired floor and tell you which elevator to go to to reduce your total time once there’s enough scale we’ll be able to have our self-driving cars do the same.