In the early 90s, being a kid new to the US and new to computers I developed an addiction to computer games. I’d play everything that I got my hands on and remember sharing floppy disks with school friends. Unfortunately, I was plagued by two issues that had pretty clever approaches: age verification and piracy protection. 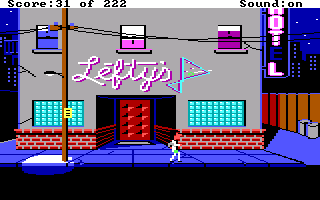 The first manifested itself in Leisure Suit Larry. I was as giddy as only a kid can be when I got my hands on it. Unfortunately, that went away when I was required to take an “age quiz” as soon as the game loaded. The age quiz consisted of a series of multiple questions that only an adult would be able to answer. These ranged from factual ones such as “Who recorded ‘Let it be’?” to comical ones such as “Do girls really have cooties?” I do have memories of playing it so I must have figured out some way around the verification. I must have either guesses correctly some of the time or took notes of the answers that allowed me to play.

Another game I enjoyed was a basketball game that I suspect was Lakers vs Celtics and the NBA Playoffs. Unfortunately, I got the disk from a friend and it had a nifty way of dealing with piracy. When starting the game, it would ask to provide information that could only be found in the game manual, for example asking for the 7th word on the 15th page.

Sadly, both of these approaches disappeared as task switching became standard in the newer operating systems and internet access became common.