The messaging space is fascinating. There are probably hundreds of apps available with pretty massive fragmentation. Onavo collected the following data to indicate the reach of the various messaging apps by country and while WhatsApp (owned by Facebook) is clearly dominant there are some countries that WhatsApp is a fringe player, especially among Asian countries. 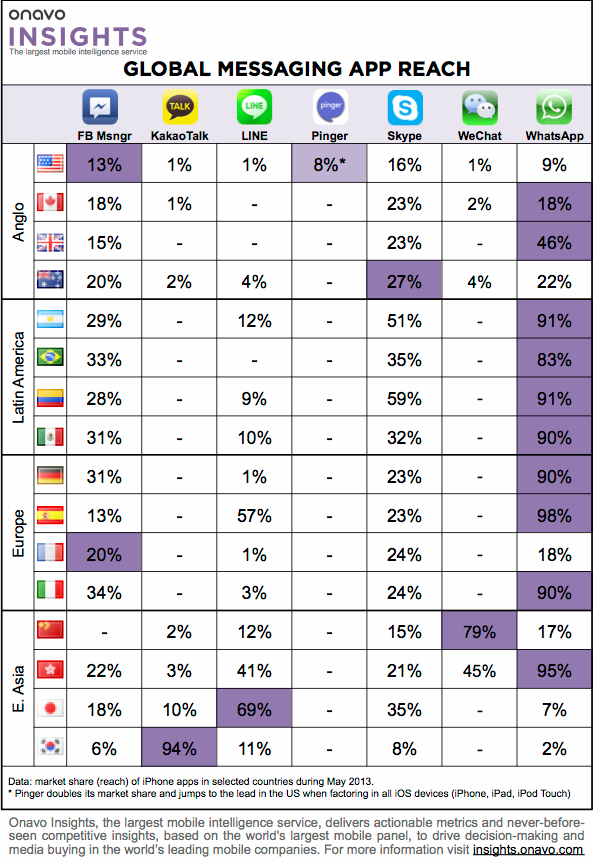 It’s shocking how dominant the local companies are in Asia. WeChat is the behemoth in China. In Japan it’s Line. And in Korea it’s KakaoTalk. I don’t know whether it’s as simple as nationalism or that the local companies just have a much better understanding of the market and were able to build better products.

I just view messaging apps as utilities.There’s no need to restrict myself to a single app and I use them reactively. If someone messages out via iMessage I’ll use that. If someone uses WhatsApp I’ll use that. And so on. If a friend asks me to use a particular app I have no problem downloading it and giving it a shot. They have limited network effects and there’s no reason to restrict yourself to one.

I suspect most people feel the same way. They probably have an app that’s the goto with their most frequently messaged group but if they’re part of another group that has their own principal app there’s nothing stopping them from using it.

The most dominant apps will be the ones that are able to leverage them to become utilities. Tencent has built a massive business on top of WeChat which acts as the digital hub in China. WeChat is not just for messaging but is essentially the operating system for mobile in China. It can be used to interact with a litany of services in china - including payment at physical stores, booking ridesharing services, and serving as an authority on identity. Nothing like this exists in the US or Europe and it’ll be interesting to see what comes out.