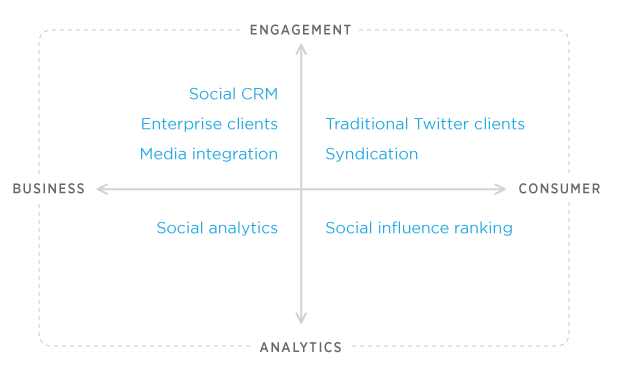 I was going through my drafts and stumbled onto one that was going to criticize Twitter’s API changes that they announced last August. In light of last week’s IPO I thought I’d finally finish it up.

The blog post described the changes Twitter planned on making with the intent of taking control of the developer ecosystem. The changes included being a lot more strict with their API by limiting the number of users a client could authenticate, reducing the volume of API calls, and requiring all Twitter content to be displayed the same way. The post also included a matrix indicating that Twitter did not want anyone developing on the consumer/engagement side but the rest being open.

At the time, many developers (me included) felt betrayed. We made Twitter successful and now we were limited in what we could do. In hindsight, these moves have been obvious. Since then, Twitter’s been rolling out a ton of changes that wouldn’t have been possible without controlling the entire experience. It also gave an indication of their monetization model. At the time, some thought that Twitter would try to monetize by selling access to the data feed or by offering premium features that large brands could use to control their pages. Turns out it was just advertising. By controlling the way every tweet is seen they’ve been able to roll out sponsored tweets and now, images.

I still think they took the easy way out by choosing an obvious business model and yet I can’t really fault them given last week’s result. It does make me wonder whether advertising is the business model of choice for an IPO.