Why's the iPhone 5C so expensive?

Many people expected the iPhone 5C to be priced low in order to compete with the cheaper Android phones in countries without carrier subsidies. The news that the 5C’s starting price was $549 left many in the tech community surprised and concerned with many believing that the price needed to be lower than $400 in order to compete worldwide.

I'm definitely speculating but I believe the reason for such a high price for the 5C was to avoid cannibalizing the sales of the 5S while also framing the comparison to be iPhone vs iPhone instead of iPhone vs Android. When people go smartphone shopping they see that the 5S is “only” $100 more than the 5C and pay the difference for the more premium product. If the 5C were significantly cheaper people would be comparing it to a similarly priced Android phone which may encourage them to go with the Android or they'd compare it against the 5S which would get many to purchase the much cheaper 5C instead.

Localytics put together a great chart showing the share difference between the 5S and the 5C which supports this view. The 5S is outselling the 5C in every country by a large margin. And although Apple could get higher sales volume with a cheaper 5C, I believe that the cannibalization of the 5S and the reduction in margins would have made Apple less profitable overall. At the same time., charging a lower price for the 5C to get more market share at the cost of profit may have been the right long-term decision. 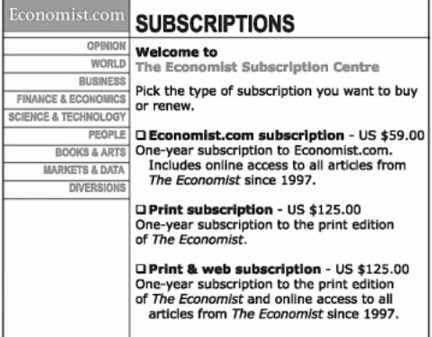 Pricing products that are sold worldwide is a tough problem since every country has its own economic environment with unique shopping behaviors. This challenge is magnified for products that can easily be bought in one country and resold in another. The opportunities also vary significantly: the US is a mature smartphone market where carrier subsidies exist and make the buyer less price sensitive while in China many people are getting smartphones for the first time and lack carrier subsidies that will help reduce the initial sale price. We’ll just have to wait to see whether this was the right pricing decision.

Note: This reminded me a pricing table the Economist had a while back that looked like an error. There were three options: 1) a web-only subscription for $59, 2) a print subscription for $125, and 3) a print and web subscription for $125. In this case, the last two options were the same price but option 3 offered more value so it was clearly better than option 2. Yet by having option 2, the Economist got people to compare option 3 against option 2 rather than option 3 against option 1. This phenomenon is called the “Decoy effect” and worth understanding, especially if you’re a marketer.